Today's followers of the Blue Ridge hounds ride over the same country and along the same twists and turns of the Shenandoah River as did George Washington nearly three hundred years ago when he followed the hounds of his employer and friend, Thomas, sixth lord Fairfax. The two pursued the native gray fox behind hounds that Fairfax had brought from England.

For the next hundred years, foxhunting in Virginia continued to flourish privately. However, by the time the Civil War had run its tragic course, the southern economy was crippled, its social fabric asunder, and its citizens poverty stricken. Those changes set the stage for the formation of organized hunts and subscription packs. An English emigré, Archibald Bevan, helped to organize the Blue Ridge Hunt in 1888, and he served as its first Master. William Bell Watkins, Alexander Mackay-Smith, and Mrs. George (Judy) Greenhalgh, Jr. were among the Hunt's most influential Masters of the twentieth century. 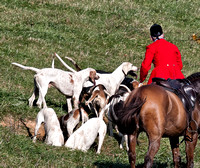 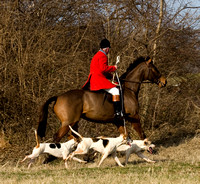 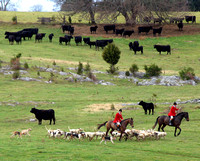