The country lies in Frederick and Washington counties, Md., except for a triangle between Interstate 270 south of Frederick city and Intersate 70 east of Frederick; plus those parts of Jefferson and Berkeley counties. West Virginia, within the hunt territory of the New Market-Middletown Valley hounds. Most meets take place within Middletown Valley itself which consists of rolling farmland with intermittent woodlands.
© KLM Images, photography by Karen L Myers 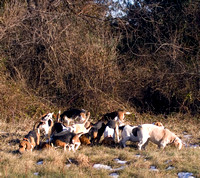